Pickleball Serves up Health Benefits and Friendships During COVID-19 Pandemic 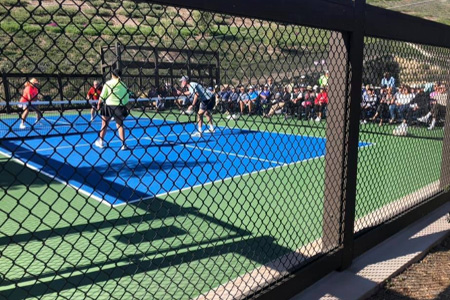 As the sun begins to rise, a group of residents are grabbing their paddles and heading out to the pickleball courts at Reata Glen senior living community. Three days a week, for nearly two hours, the residents practice their backswings and drop spins against their competitors. For many of them, like resident Barbara Trafficanda, it’s a game that’s kept them busy and in shape during the COVID-19 pandemic.

“The sport is so popular at the community because residents can practice social distancing while getting a good workout,” said Barbara. “Just this last month, the community added two more courts so more people can play and remain socially safe.”

Pickleball has been growing in popularity across the country, especially with the senior population. Nearly 43% of the core players of pickleball are 65 years and older. Pickleball is best described as a cross between tennis, badminton, and ping-pong. Played in a space that’s about one-third the size of a tennis court, “picklers” often pair up for doubles (two on each team), although the game can also be played by singles. Each participant uses a paddle, and the ball resembles a wiffle ball. A match typically lasts around 10 to 20 minutes and ends when one team has reached 11 points.

Thirty Reata Glen residents regularly use the courts. This is one of many sports played at the community so residents can remain active. The social aspect has also been important, especially during the current pandemic.

Whether you’ve just started exercising or have been doing it for a while, you’ll discover many health benefits of pickleball. Mentally and physically, your whole body benefits. According to research, those who regularly play pickleball have a decreased risk of depression and heart disease and increased social connection. Social connection for seniors is critical, playing an essential role in their mental, emotional, and physical health.

Read more about the popular community sport in the San Juan Capistrano Patch. 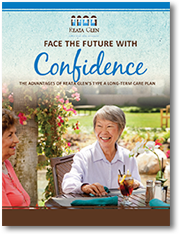